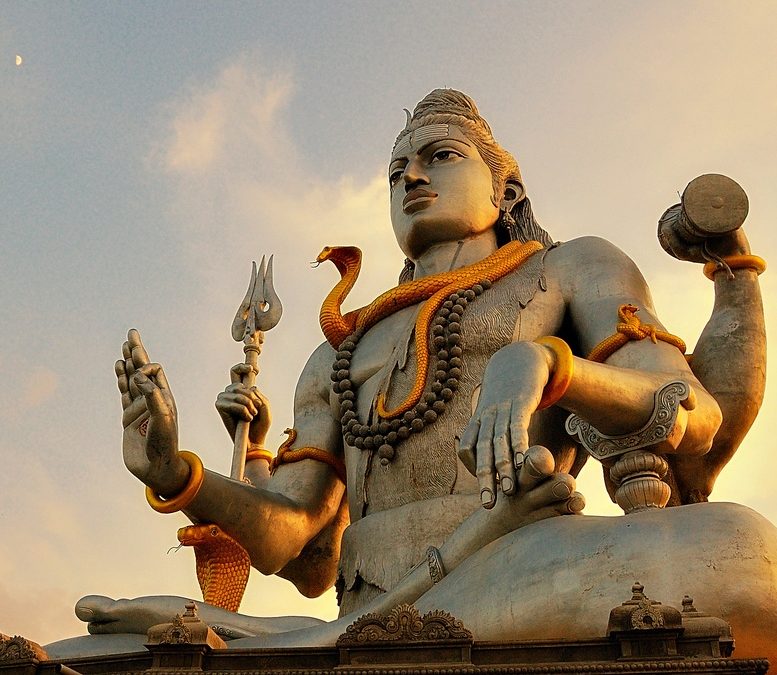 Lord Shiva is known in many glorious forms and by many honorific names. You may have heard him referred to as Mahadeva. But what does “Mahadeva” mean and why is this an often-used name for Lord Shiva? This article will help answer these questions for you.

A Sanskrit term, Mahadeva can be translated as the “greatest of the Gods”, or as the “God above all Gods”. It is frequently used as a title for Lord Shiva by his devotees. This is especially the case when Shiva is thought of as the transcendent Absolute.

There are many names and titles that refer to Lord Shiva. Each one highlights one of his different aspects, and each can used to great effect in the appropriate circumstance for practice.

Why is Shiva Called Mahadeva?

When Shiva is praised as Mahadeva he is called upon in his Absolute form, transcending all forms of difference and representing the basic element with which all of reality is built.

In fact, as Mahadev, Lord Shiva can be said to be the light of pure consciousness, the fundamental substance that supports and allows for the manifestation of all things. This includes the personal experiences and shared realities of all beings, embracing all existence, equally that of all humans and even gods.

It is said that Lord Shiva is called Mahadeva because he is worshipped by everyone including, the devatas (gods) and asuras (demons). As long one’s devotion is unconditional, he is said to grant boons, even to asuras!

Now we will look at the many different ways Lord Shiva is depicted. We may be able to gather some other clues to why he is called Mahadeva.

Clues to other aspects of Lord Shiva’s greatness can be seen in his other depictions. Telling you about them will require us to sing Lord Shiva’s praises as we briefly mention those qualities of his we may convey in language. For indeed, he may reside formlessly and without qualities, evading the ability of speech to touch his essence.

Rudra is often used as another name for Lord Shiva, and is first mentioned in the ancient Rig Veda of India as the fierce God of thunder. Today Lord Shiva and Rudra are seen as possessing a shared personality, especially when Lord Shiva is worshipped in his fierce form. This connection shows Lord Shiva to be present within the ancient Vedas as well, but in the form of Rudra.

One of the most popular statues of Lord Shiva is Shiva Nataraja.

As Nataraja, the “Lord of the Dance”, Shiva performs his cosmic dance, alternatively creating and destroying the universe through the limitlessly creative expression of the infinite given form. The act of creation flows out of his grace and divine dance. And what a work of art the universe is that it unfolds! Would you not agree?

Only through performing his act of destruction can the cosmos be created again. This is another reason why Shiva is called Mahadeva.

Shown resting in samadhi born of his divine yoga, Lord Shiva is also known as the “Lord of Yoga”, and is often seen meditating on Mount Kailash. He is sublimely blissful in this state of non-dual experience. His union with all of reality shows how fully inseparable from the cosmos he is, all the while transcending the experience of duality and separation.

As the Lord of Yoga Shiva’s awareness holds all things. He is radically open to reality.

He is also shown as a father and family man. Alongside his wife Parvati, Shiva is often seen with his sons Ganesha and Kartikeya. His son Ganesha is particularly renowned as the great remover of obstacles and bestower of wisdom.

Lord Shiva’s mystical vehicle is Nandi, the bull, who is also worshipped widely in India.  Nandi is very dear to Shiva and is always close-by. A colossal statue of Nandi sits atop the Chamundi Hills in Mysore, close to a nearby Temple devoted to Lord Shiva.

When Lord Shiva is alongside his wife Parvati, he can also be seen as Mahadeva paired with his consort Mahadevi, the divine Goddess.

Shiva is both of the world and beyond it essentially embodying non-dual awareness. He is equally at home as a father and householder, as well as a mystic Yogi. As the greatest of the Gods, Shiva shows us how to fully embrace all aspects of our lives.

It is also said in the scripture known as the Srimad Bhagwatam (12.13.16) that Lord Shiva is a devotee of Lord Vishnu. Because of this, whenever one worships Vishnu, Lord Shiva himself is pleased too!

Mahadeva is the transcendent Absolute and the ground of all reality. So, no matter where you worship him through devotional practice, you are connected to his auspicious qualities and can receive his blessings.

Tantra Yoga can a potent means to connect with Mahadeva’s level of reality. It can be especially powerful and potent to use the following practices focused on Lord Shiva:

An excellent time to focus on the worship and celebration of Lord Shiva is during Mahasivratri. And, you don’t need to be at one of the beautiful temples in Mysore India devoted to Shiva in order to take part in the auspiciousness of Mahasivratri.

Performing practices, such as yoga asanas or mantra recitation, devoted to Lord Shiva in your own home can be very powerful at this time. In this way, your home and even your body can become a temple devoted to the worship of Mahadeva, even more when they are recognized as being already Mahadeva.

No matter what your circumstances in life Lord Shiva, as Mahadeva, bestows us with our own Dharma as a way to participate in his creation. Embracing our own Dharma becomes a dance between us and Shiva, it is the fulfillment of our role in his divine play that establishes reciprocity through our active participation in spiritual life.

Shiva invites us to contemplate him as Mahadeva and seek union with his divine reality.